Last weekend, Sam and I had a very long Friday night when we picked up our boat, Britannia 4, from nr Headcorn in Kent and moved her over 300 miles to Falmouth in Cornwall. Finally arriving around 5am.

The day started at 2.30pm when I met Sam in a rainy Covent Garden. Sam was waiting under cover wearing just a pair of shorts and his Team Pacific rowers t-shirt and was fully loaded with a bevy of items we would need for the 24hrs. I was also laden with equipment, though between us, we didn’t have a tent. The inventory James was bringing with him in a few hours was also void of one. Our stuff was going to get soaked.

We set out to trawl around Covent Garden’s many outdoor shops for a cheap ex-display or returned faulty tent but it seemed just as summer had gone, so had the supply of tents. It was looking unlikely that we’d be able to get our hands on even a brand new tent until we were met at the door of Jack Wolfskin by the very helpful Si. We explained to Si who we were, what we were doing and what we were looking for. He disappeared off down stairs and very quickly came back with a choice of 2 very high quality tents that he generously offered to lend us. We opted for the freestanding dome tent, thanked him and made our way over to Leicester Square to pick our spot.

Once in Leicester Square our spot was obvious.. right in front of the Empire cinema and casino. We had a chat to the doorman at the casino and he generously offered to watch our bags while we ran over to the Strand to pick up the rowing machines that Fitness First had agreed to lend us for the weekend. The lady on the front desk at Fitness First couldn’t have been more helpful. She showed us where the machines were, let us fill up our water bottles and gave us a few spares and within 10 minutes we were wheeling 2 Concept 2 rowers the half mile to Leicester Square. 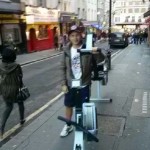 Sam and me transporting the rowers

Within moments of putting the rowers down, the rain had stopped and we had gained some interest from Conrad and his Dad Marc. Conrad fancied trying out the rowing machine and he set off rowing at the same time as Sam started the first of his 4 2hr shifts while I got our pitch set up. Marc offered a hand with the pitch, which in the strong winds proved invaluable. I don’t think we could have got the banner rolled out and the tent put up without his help. Cheers Marc!

Fast forward an hour and 15 minutes, the pitch was up and Conrad was still going and had clocked over 10km!!! Still full of energy, he reluctantly left the rower and he and Marc left for a curry house. 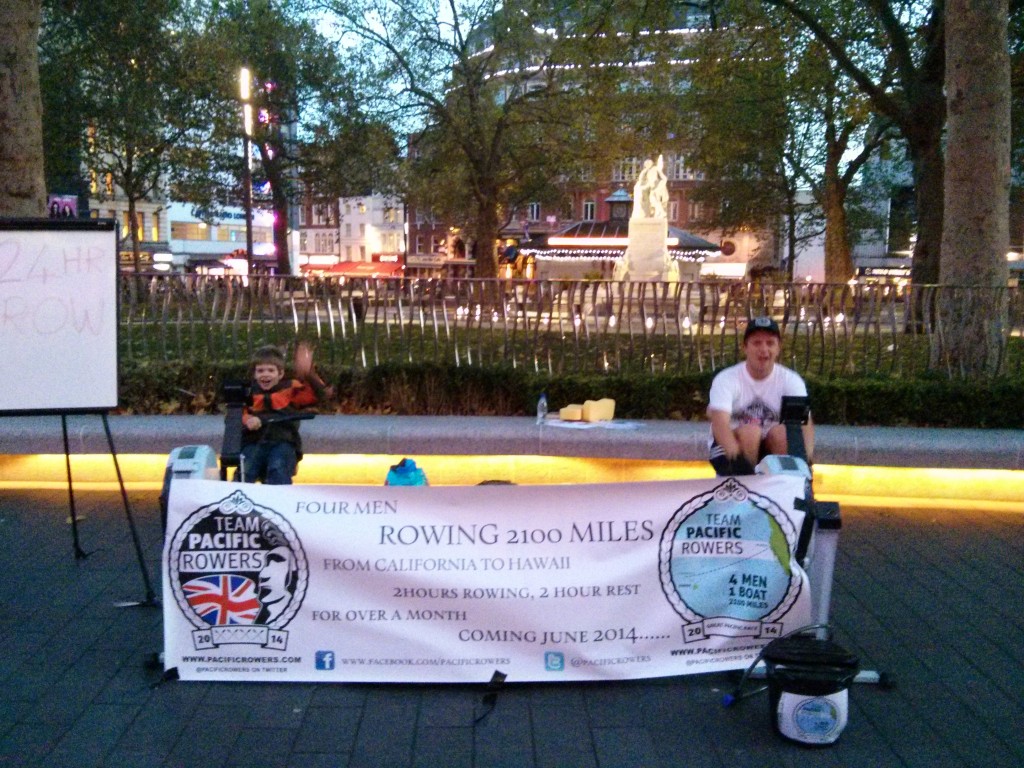 Sam rowed on for another 45 minutes then I took over for my first 2hr shift, during which James turned up laden with more stuff for the next 20 or so hours. James had brought a table and chairs which, in the strong winds, proved invaluable. We were able to move the gear supporting the banner into the tent for extra weight to prevent another episode of it lifting off the floor in the wind and attempting to fly to the other side of Leicester Square.

I rowed my first uneventful shift and was glad to hand over to James to give my behind a rest. Even with the memory foam cushion I had brought from the boat, it was still very uncomfortable. 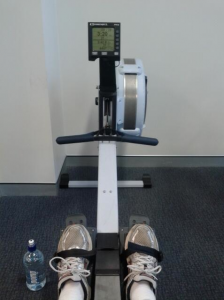 During my shift, we got a message from Colin from over in New Zealand. While he wasn’t able to be with us in Leicester Square, he was doing his part in Auckland at his local gym. Clocking 4.5 hours to add to our 24.

By now, darkness had truly fallen and the witching hour was approaching. We rowed on and on through the night squeezing in rest in the tent when we could but with the alcohol fueled activity going on around us, it was hard to relax and get any real amount of sleep. I managed around an hour the entire night. 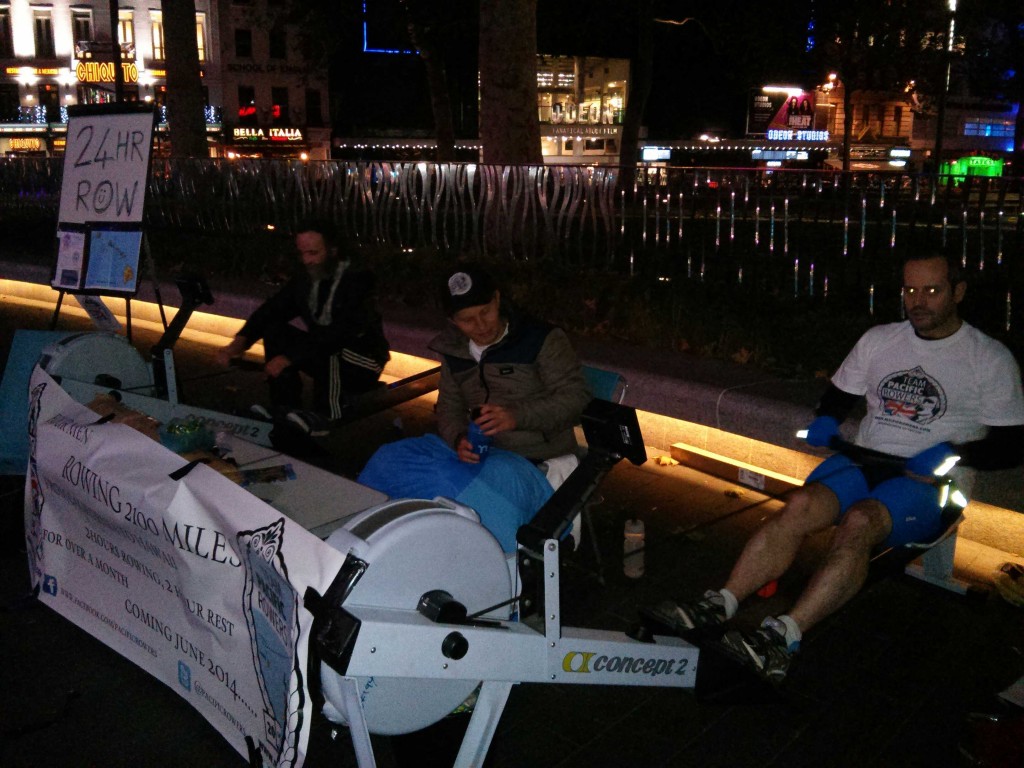 The overnight hours brought some, let’s say, “interesting” characters and situations; more Halloween zombies than you can shake a stick at, the Hare Krishna party in front of us for half an hour or so, the cowboy hat wearing thai chi performer who sat with us for an hour and then threatened to beat Sam up because he wouldn’t let him row while claiming he could row much faster than Sam and throwing a few un-PC insults at the time. Luckily the situation was resolved peacefully and he was on his way. 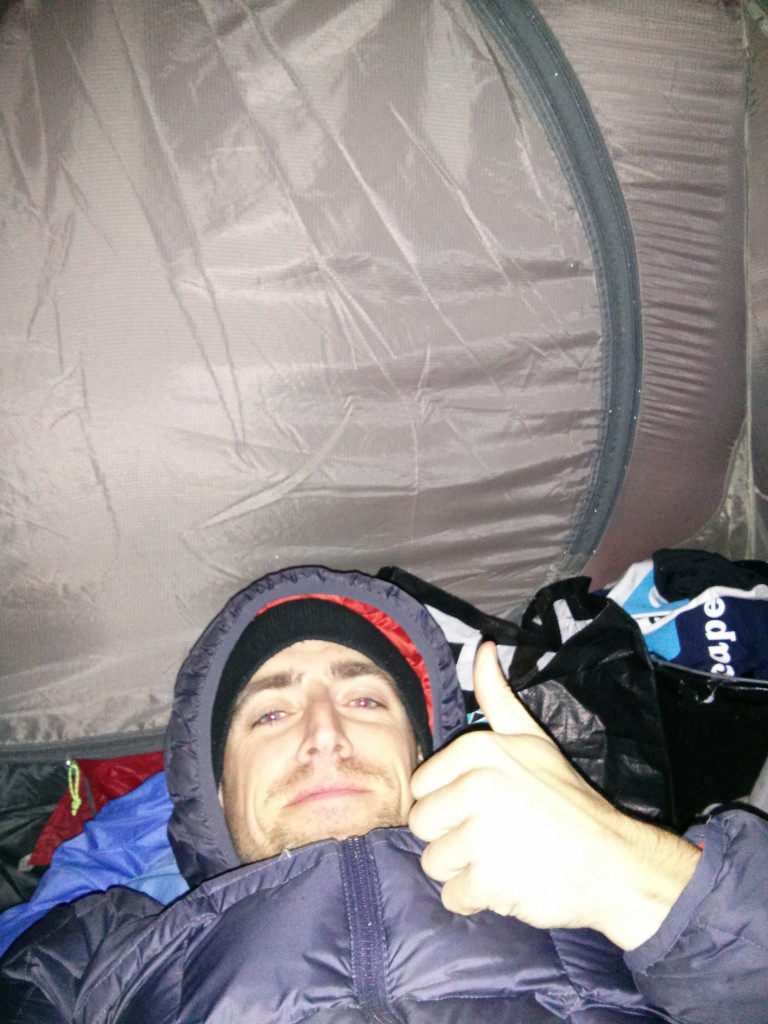 After the hour’s sleep I did get, I awoke to be told of an incident with a lady sporting a broken bottle in each hand, blood covering each arm, wearing a blanket. She stopped at our notice board for a while and walked away to be apprehended by the police.

We also met a couple of complete gems in Kadesha and Dwayne. They came over around 1am to see what we were doing and ended up sticking around until around 5am. A couple of very bubbly and entertaining characters, they kept us amused and in very high spirits with chaos going on all around us. They were also a huge help in our fund raising efforts, shaking buckets and talking to folk about what we’re up to. Massive thanks to those 2 guys (follow them on twitter: @RihannaNavyLdnX @DwayneOfficial). 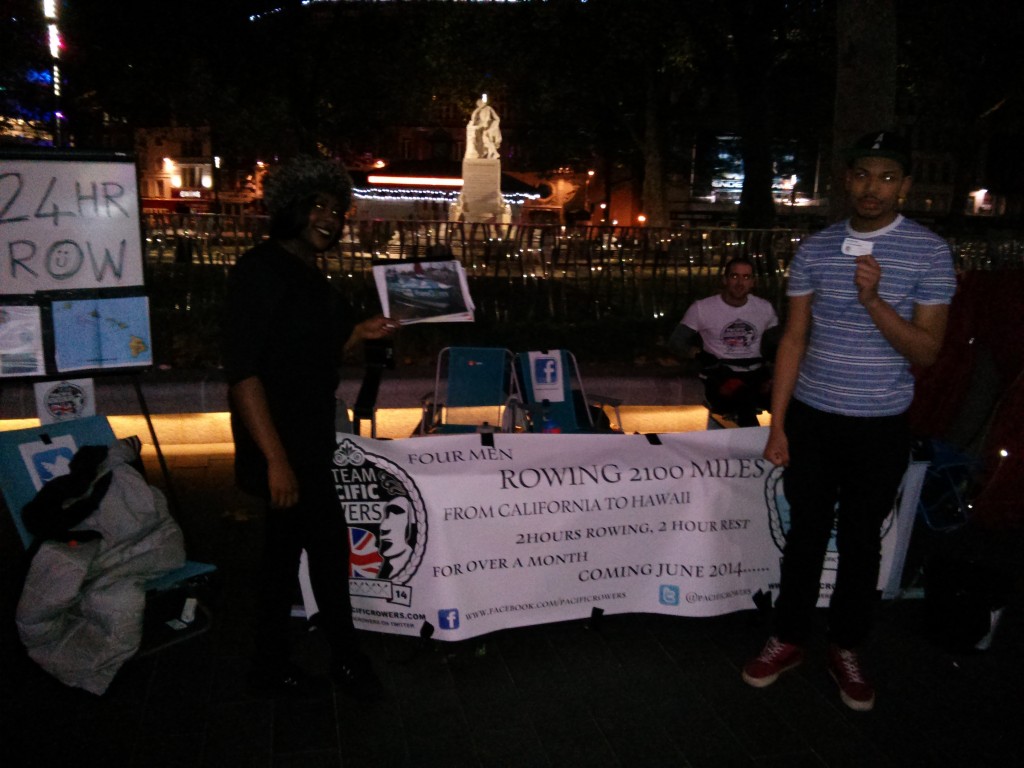 Shortly after Kadesha and Dwayne left us, the streets got quiet and the sun came up. We were happy to see the start of the new day. Footfall gradually increased and at around midday we saw our friends from the start of our row, Conrad and Marc. They were on their way to the science museum before flying back home to Germany and Conrad wanted to come for another row. He rowed like a total boss for another 5km. 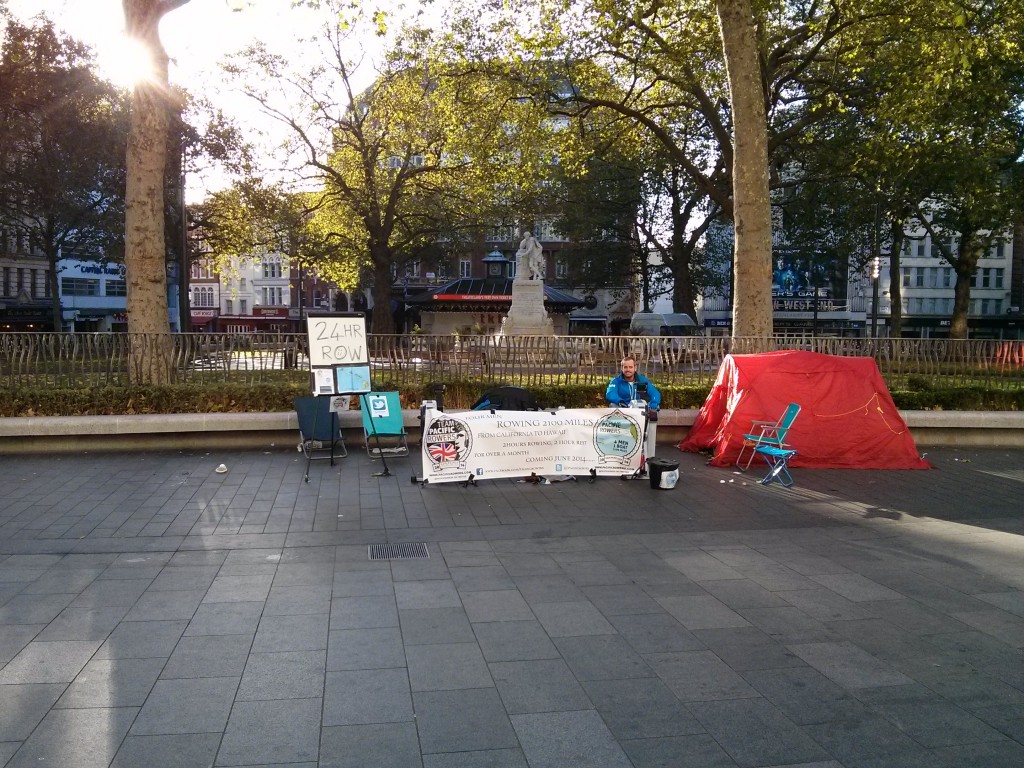 By now we were on our final shifts. Sam was out first, then I finished my final 2 hours before handing over to James to smash out the last shift of the 24hrs which he did casually in a pair of jeans. 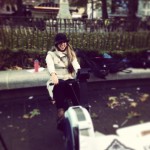 We counted down the final 60 seconds with a number of revellers and then cracked open the beer to celebrate.

We were truly humbled by the kindness, generosity and sheer interest from the people in London this weekend.

Huge huge thanks again to Jack Wolfskin Covent Garden for the tent, Fitness First on the Strand for the rowers and the Casino at the Empire for the use of the facilities and for watching our bags!

Oh… and I got pooped on by a pigeon and some of it landed on my nose. 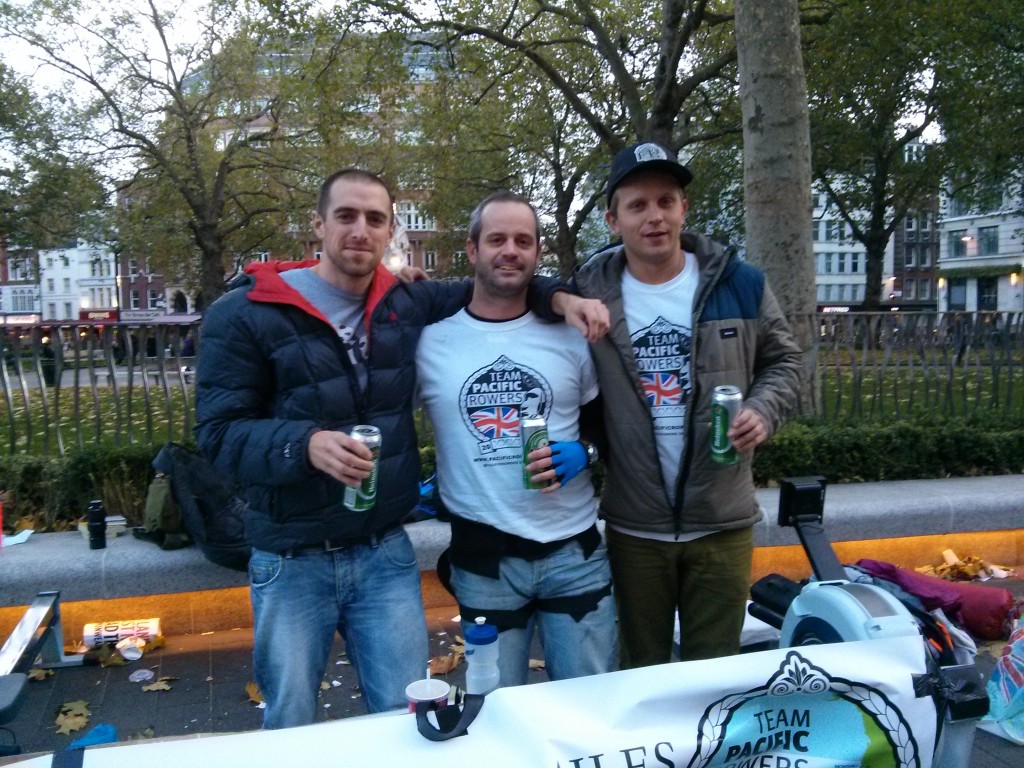 Celebrating the end of the 24hrs

At very short notice, Sam, James and I (Fraser) are putting the final pieces of preparation together as we head in to central London to begin our 24hr row-a-thon.

The idea of a 24hr static row was something Sam put to us in the very beginning of our campaign as a great way to gain publicity and raise funds for our expedition. We all agreed that it would be a great idea and a few dates were thrown about but nothing was settled on and the idea fell on the back burner. 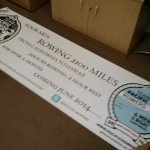 Then out of nowhere a couple of weeks ago, I got an excited phone call from Sam’s inner 12yr old on Christmas saying he’d put in an application to the council to do a row in the first weekend of November. We slowly started putting a plan together on the off chance that our application was granted and then on Wednesday, we got the official word that we had the go ahead. Trafalgar Square, Covent Garden and Leicester Square were thrown up as possible locations. We had our minds set on Leicester Square – for the footfall and lively atmosphere – so when the council agreed, we couldn’t have been happier.

I’m meeting Sam in Covent Garden at 2pm and from there we are to head over to Fitness First on the Strand who have kindly offered to lend us 2 rowing machines. James has a marquee which he will be bringing at 7 when he arrives so we should have a nice little set up. We’ll also have pictures of our boat with us so come for a sneak preview before our official unveiling.were ecstatic. The banner was ordered for next day delivery and the wheels were put in motion.

We’ll be alternating the rowing between the 3 of us (Colin, being in NZ will not be able to attend – though he has promised to punish himself on an ergo in Auckland) on a single rower and we’ll be offering the chance for members of the public to have a go and face off against each other in sprint challenges on the second machine.

It would be great to see a lot of faces down there so if you are in the area, come and have a chat and challenge your friends at a sprint race.

I’m off to try and find my cycling gloves and camera mounts and then get myself into central London.