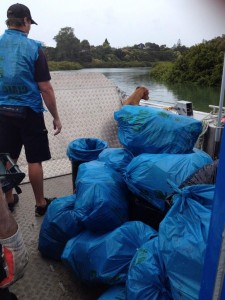 The haul from Henderson Creek, pictured just before we picked up the couch.

The fellas at Sea Cleaners, the crew contracted by Watercare Harbour Clean-Up Trust to tidy the city’s waterways and seas, know I am a soft touch, so when they plan a jaunt up one of Auckland’s muckier rivers, rather than one of its gorgeous islands, I get drafted to come along. Or maybe that’s just BPA-induced paranoia.

But it’s all good. The waterways that empty into Waitemata Harbour are where you’ll find the greatest concentration of trash. They’re where we fill the most bags; where we are of most benefit. And to be fair, it was a damp, dreary day. A trip to Tiri Tiri Matangi would be wasted on a day like this – is what I keep telling myself each time nose-melting whiff floats close.

Today’s voyage on the Phil Warren II (named after a former Auckland councillor, who the guys at Sea Cleaners hold in high regard) is up Henderson Creek, a tributary that runs next to the Te Atatu peninsula and from, well, Henderson. It’s the next left after the Whau River and is pretty, flanked by mangroves for much of its length. Mangroves are excellent at holding onto rubbish and passing it to us, but they are also good and cutting up the shins when the tide is in.

It’s my second time up the creek, and on the boat today, along with Sea Cleaners Ben and Hayden, are two extra vollies: Paul, who lives near Henderson, and Katrina, a surf rower at Red Beach.

We start with a quick jaunt to the city to clear up and litter around the ferry terminal and park up to get a quick coffee. At this point high tide is about two hours away, which means the creek would have swollen with enough water to get the boat up there, but not high enough to flood the banks too much.

The wind is likely to pick up to around 30 knots later in the day, notes Ben, so we make our way quickly to Henderson Creek.

Ben guides the PWII for about 20 minutes up the creek, mindful of the no-wake zones and the passing rowers. Today was to be a multi-stop clean up; Hayden and Ben know plenty of trash collection spots up the creek, into which currents feed the rubbish from the residential areas and industrial parks.

The first point is a public jetty near a couple of boat yards. The amount of rubbish dumped here is pretty obscene, including an entire black sack of crap. There is plenty of evidence of good times: beer bottles, cigarettes and even a condom, leading Katrina to joke about romance being alive and well. The haul from here is good, and we leave it close to spotless.

On the way to the next spot an entire couch, tagged most probably by the people who dumped it, bobs up and down on the incoming tide. The mangroves appear to be holding onto it pretty tight, so we decide to collect it on the way back.

For the next couple of hours we make three or four stops where rubbish has accumulated, picking up the usual suspects of plastic bottles, polystyrene blocks, plastic bags, balls, and small pieces of layered foam that Hayden says is uses by glaziers to separate window panes. It’s remarkable that about 10 per cent of the plastic I pick up I have no idea what it is used for.

All told we get about 20 bags of rubbish, which at 50 litres a bag, is a pretty good haul. We head back, picking up the couch on the return to Westhaven before I head out to my day job.