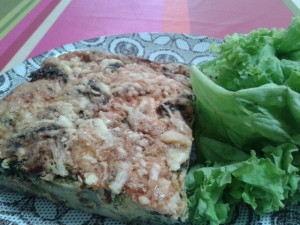 Unbelievable as it may seem, it was not until about 18 months ago that I first tried frittata at a Halloween party at Halloween in north London.

The hosts were a Spanish couple who insisted I taste their recipe. Of course, it was delicious and once I popped, I struggled to stop. Only out of politeness toward the other guests did I finally step away from the frittata.

I found this particular recipe on athletemasterclass.com after I Googled something along the lines of ‘nutrition for athletes’.

It’s sold as a recovery meal following a hard training session as it is an excellent source of protein, balanced with some carbohydrate and other vegetables.

Some adjustments were needed to suit Parker’s palette (the fussy little blighter):

1. White onion was substituted for red onion or spring onions or scallions as I recently found out they are also called. Parker dislikes both the texture and flavour of white onion. He’s ok with it grated or very, very finely chopped, but ultimately prefers red or spring.

2. Cheddar cheese replaced with a mix of ‘Tasty cheese’ and parmesan– cheese in NZ tends to not to be named specifically. The cheese of choice in our household is quite simply called ‘Tasty’. Well, if the cap fits.

3. Sweet potato replaced with half kumara (NZ’s version of sweet potato) and half white potato. Parker is not hugely enamoured with kumara (I got eggy at the cost of it, jumped up potato: ed) but we had two that needed to be used up in the pantry (sorry Parker). It also added a nice splash of colour to the dish.

The humorous shape doesn’t justify the price of a kumara. The world’s most expensive spud?

The basic premise of the recipe is really good. Below are some suggestions for alternative ingredient/ cooking methods and having now cooked this twice, I can vouch that it is a quick and easy way to use up stray quantities of vegetables left over from a cook.

For example, spinach works well and again, adds a delightful burst of colour as well as a little extra nutrition. Also, anything between four and six eggs is fine, so don’t panic if don’t have half a dozen to hand.

Method
1. Par boil the potato so it is cooked and soft
2. Whisk the eggs and milk, add pepper and a little salt to taste
3. Fry the onions and garlic in a dash of olive oil, till soft
4. Add the parsley and chili, cook for a further 2  minutes
5. Add the broccoli and cook covered for 2-3 minutes
6. Mix in the potato
7. Transfer to an oven-proof dish (doesn’t have to be very deep)
8. Pour over the egg mixture, sprinkle with cheese
9. Bake in a moderate oven (about 180/ 210) for 30-40 minutes until browned on top

Alternatives
· This dish was baked in the oven, however it can be cooked up in a frying pan with a metal handle, skip step 7 and add the eggs to the mixture in the frying pan. Cook till almost firm, then place under the grill to brown the top.

· You can replace the sweet potato with regular white potato, and the broccoli with any other green vegetable you prefer. It also works well with potato, mushroom and tomato as the vegetable combination.

· Pre-cook a puff pastry base to turn this into a quiche. Traditionally quiche doesn’t normally have potato, however this is an essential to include for the athlete to add carbohydrate and ensure it is a great recovery meal.

Parker’s verdict:
What’s that? Sports nutrition with cheese? Oh go on then. For it’s simplicity, this dish is a cracker, and it keeps getting better, especially with the added greens inside. It’s almost like you are not eating them. I cannot imagine growing tired of this quickly, which is handy as another benefit is it is easy to move about: there’s no risk of it leaking out of Tupperware, and it can be eaten hot and cold. A regular for work.

To help Team Pacific Rower crewmate Colin Parker prepare for the Great Pacific Race taking place in June 2014, I have offered to cook for him a diet that complements his training. This will be as much a journey of discovery for me as it is for him; I know as much about nutritional cooking as he does about rowing: naff all.

It’s been a while since I’ve set foot in a kitchen, partly because Parker and I recently relocated from Brixton to New Zealand and it’s taken me some time to adjust to a new kitchen; building up the pantry, figuring out the equipment etc.

The other part is the fact that we share our kitchen with a family of foodies, which comprises two ravenous boys, one of which (12-year-old Cameron) is quite the budding chef. Like turning up to the Harrods sale on the final day, providing an obstacle in the path of two very hungry boys by cooking at peak times is just plain stupid.

For a while, I sort of lost my nerve in the kitchen. But I think I’m now on track to getting it back. Cooking after the family has eaten appears to be the way forward.

The kitchen is then clear for a late-night run that coincides quite neatly with Parker’s return from work (about 10.40pm; he is a sub editor for an Australian national newspaper). Whatever is on the hob is then normally about 15 minutes away from being ready and ripe for sampling.

So this will be a fairly regular blog to tie in with what the guys are writing about that will offer ideas and recipes for those who only eat one meal a day, which starts at 7am and ends at 11pm.

So who fancies taking part in an ocean rowing crew for the day? Playing cards in the cabin before taking your turn to perch on the rollerseat and experience the wonder of paddling at sea?

Well you can by winning our #namethatboat competition. You can join Team Pacific Rowers for a day’s training on the Channel or North Sea and find out what it would be like to row an open ocean for five weeks.

We bought our boat last week, and she is a real cracker. Gorgeous in fact. She will be our everything for five weeks next year – literally, what keeps us alive.

We are looking for a name that totally sums up our quest next year, to row from California to Hawaii with about 12 months combined rowing experience between us.

We have already had some cracking entries, such as my personal favourite, Rowing Atkinson. But aside from the puns and the smut, which are all valid and potentially winning entries, we would like to hear of names that are particularly meaningful, or tie in with our row’s ambition, to raise awareness of plastic rubbish in the Pacific.

You have until November 1, which is when we intend to re-register our boat. So don those thinking caps and wrote your suggestions below; or tweet us at @pacificrowers or visit our Facebook page at facebook.com/pacificrowers.