Belgium. Brussels, beers and, er, beaches? Indeed. And the North Sea coastline of this beautiful country faces the same trash problems of those the world over. The man behind beachcleanup.eu speaks to Team Pacific Rowers about his clean ups and education campaigns – all done in three languages. 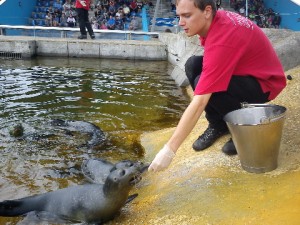 Gregory feeds seals – just before they were released back into the wild – that he and his group saved.

Tell us about yourself

My name is Gregory Landuyt. I am 22 years old and from Belgium.

Describe what it is you do

With my website beachcleanup.eu I try to reach the children. I’m also working on an educational program with interactive pages on my website.

Before that I’ve organised beach clean-ups in Blankenberge and Zeebrugge (Bruges) in the name of Sea First vzw and with the cooperation of my colleagues in SEA LIFE.

Where do you organise beach clean-ups

I organize my actions on the Belgian coasts.

Why do you organise beach clean ups?

Ever since I was born I love the seas and anything around them so when I finished school I applied for a job at the National SEA LIFE Marine Park in Blankenberge. SEA LIFE is a brand of the Merlin Entertainments group and it’s the biggest group of aquariums in the whole world. 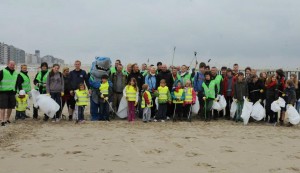 I worked there as a general assistant and an educational entertainer. I learnt a lot about caring for oceans and I worked at the rescue center for sick or wounded seals. I’ve learnt a lot there and I’m happy I had that experience. I did this job for more than three years. Right now I’m still a shark specialist. I don’t know everything but I know a lot. It often happens that biologic teachers ask me as guest teacher to speak about sharks.

I started to organise them because they asked me to and right now I organise my actions because I like to do it.

How often do they happen? How do you promote them?

I organise a real action once a year. I promote these by social media, tv, radio, flyers and posters.

How many people come along? Are there lots of regular faces? What would you say, generally, are their reasons for doing so?

The past years there were a lot of people. Sometimes there were even too many people so we didn’t have enough trash – hahaha.

Of course there were faces who returned each year. They did because they love nature and because they were in the Sea First organisation.

What are the most common articles you find?

What have been the most bizarre?

We once found a full playground climbing net, some underwear, a sweater and we also found once or twice a condom. 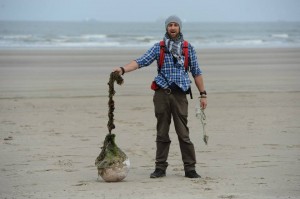 Is there a strong beach-clean community where you are?

There are lots of beach clean ups but we have lots of trash on our beach, though the government tries to keep them clean by placing trashcans every 15 metres on the beach.

People are very lazy on getting up to walk a few metres for a trashcan. Some of them use a plastic bag whole day long and then drop it next to the trashcan.

Your website mentioned you do education work: describe what it is you do.

I’m working very hard on an educational package for schools which will be available for download September 2014. This package will be filled with educational games to learn about trash and you will also be able to work along with the educational pages that require a personal login for scholars.

Have you noticed a decline or increase in the amount of trash you find on the beaches?

Not really, each year we found approximately the same amount of trash except for last year. Then we found even more, but that’s because the distance we’ve cleaned was larger. 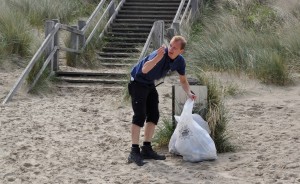 Gregory, hard at it.

The beach of Nieuwpoort and Ostend are the two most littered beaches in Belgium.

What do you think needs to change for us to better keep rubbish off our beaches and seas?

I think we need to learn children about the huge trash problems. Their parents apparently don’t do anything until someone dies or get hurt, so perhaps if children are well learned they can set an example for their parents.