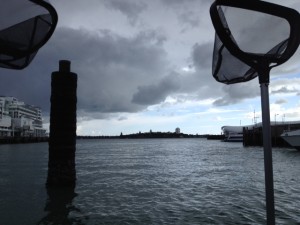 Skipper Ben was closely looking at his Garmin sea chart to try to find out where he tried to anchor the boat the previous day, before it had started alarmingly drifting.

We were just off Rangitoto Island. The previous day’s sea clean had been here but had to be quickly abandoned after the anchor, about $NZ800 of kit, dropped off the chain and let the boat go the way of the current and wind (whichever was strongest).

My first job on Team Pacific Rowers’ day out with Auckland’s SEA CLEANERS last Thursday was to try to find it. As someone who loves mucking about in the sea, I couldn’t wait, quickly whacking on the snorkel and mask and leaping off the boat into the cool, refreshing water as Ben dragged a hook along the sandy sea bed.

The water was about three metres deep. And murky. After about 10 dives to the bottom we aborted. The visibility was less than a metre and my ability to hold my breath absolutely shocking. A tank is definitely needed.

The south-westerly wind was beginning to drag in some patchy weather. Having spent just over an hour around Rangitoto looking for the anchor we decided to go somewhere that was going to be trash heavy. We were going to the Tamaki River. 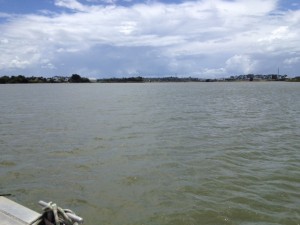 Auckland’s Tamaki River runs through the south east of the city, unloading into the Hauraki Gulf between Glendowie and Bucklands Beach, opposite Browns Island, which was the first piece of Auckland owned by a European.

Ben guided the boat through the eastern suburbs for about 20 minutes until he decided he had found a spot. I couldn’t see anything on the bank. I swear he has a sixth sense for these things.

We anchored up (with a substitute anchor), unloaded the kayaks and paddled to the area next to the weir. I made the mistake of stepping onto the muddy bank, and was soon thigh deep in thick, unpleasant mud. I managed to pull out my leg, relieved I had tied on my shoe pretty tight but curling my toes anyway to make sure it stayed on.

I then kayaked to where the rocks and concrete were.

Ben’s instinct served him well, but Auckland’s rivers are where you will always find the biggest concentration of rubbish. Having also been up and seen what’s in Henderson Creek and the Whau River, I was able to put the Tamaki River into the same category. I love sea cleaning on the beautiful islands of the Hauraki Gulf, but this is the business end of the location spectrum. 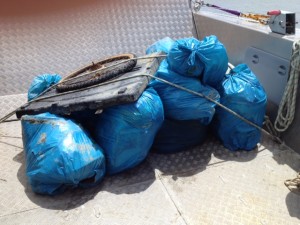 A haul from about 150 metres of Tamaki riverbank.

As the rain kept coming and going, we collected 20 bags of rubbish (plus a bike wheel, with air still in the tyre, and a kids plastic motorbike) from a section of river bank certainly no more than 200 metres long: coming straight form the urban areas, plastic bags and water bottles featured heavily. As did nappies. Used, stinky nappies (are reusable ones that much more awkward?).

Sadly the urban waterways always reveal evidence of flytipping. It makes Ben sad that some people don’t seem to care.

We managed to load it all onto one kayak, which we towed with the other. The weather was imposing, and I had to start my job at 2.30pm, so we made our way back out of the river – spotting which decrepit yachts we’d most like to bring back to life – and back to Westhaven and home at pier U2.