Try to think about how much you use single-use plastic and then imagine going one year without it. Seems almost impossible right? Danny Kirschner, 27, from Athens, USA (@anosinplastico), has set himself the goal of doing precisely that. Team Pacific Rowers caught up with the rock musician and environmentalist to see how he is getting on.

Danny with Erin (and an aluminium canteen) in Norway.

Tell us about yourself:

I’m 27, from the south of the US. After high school I made my way to a liberal pocket in Georgia called Athens (home of REM, B52s, Widespread Panic and more), with hopes of being in a rock band and graduating from UGA. I did both and found myself drawn into the world of tech startups and entrepreneurship after graduation.

On the environmentalism side, it all started with a few key friendships with people who focused on diet, travel, buddhism and yoga. These thoughts eventually crept into my own being, and I became pescatarian last year, and eventually gave up seafood a few months back. Being antiplastic is pretty similar to being a vegetarian – drawing a clear cut line in terms of what’s acceptable to purchase and what’s not. It’s really simple once you draw that line.

Why did you decide to give up plastic for a year:

In short, I’ve learned too much. Unfortunately for many corporations, governments and bottled water companies out there, I watch documentaries and believe what many of them say. While TV has destroyed many good habits, it’s also led to the Golden Age of entertainment, aka Netflix. Once you’ve seen all the new releases, there’s all those documentaries on demand about every problem you can think of in our world.

I’ve really been drawn to people who are movers and shakers in the community, who go out of their comfort zone to make the world better.  One of my biggest influences over the past year has been the writings and actions of Aaron Swartz. I admit I didn’t know him before hearing about his untimely death. One of my friends was really shaken up by the death of someone whom he praised as doing all he could for the common good, so I went digging into him.

He was a lot like me, but of course much more successful and genius.  He died on my birthday this past year. We were both 26. He co authored the RSS 1.0 specification as a teenager, co founded Reddit, and had just hacked into the MIT libraries to free a bunch of information that was supposed to already be free.  That was more than enough to peak my interest.  I spent a long time browsing his blog, and one article stood out: www.aaronsw.com/weblog/productivity. I made sure to focus on making my time “higher quality” ever since.

We’ve always heard the phrase “be the change you want to see in the world”. It makes so much sense, it’s so easy. All it takes is you doing what you want to get the outcome you believe the world needs. It doesn’t take a committee, a law, a grant, or your friends to lift a finger. If you think something should be changed, make sure you do that change.

I read about a group of people making a film about the atrocities we are committing to the marine environment with all of our plastic waste. This group was trying to raise awareness and raise money for their project. They were full time on it, making an all or nothing go at it. I had also realised the amount of plastic we use is ridiculous and is leading to problems we are only now seeing, but will become much greater if our use of plastic continues in its current state.

Plastic is a metaphor for how we (we as in the majority) live in our society. Buy it, use it, toss it, don’t think about it any more. I’m at Starbucks right now. Everything is served in a togo cup with a plastic top, or a sweet drink in a plastic cup with a plastic top and plastic straw. I was at Trader Joe’s earlier today. Some 95% of the produce and raw stuff is bagged and sealed. Yes they have paper bags for your groceries, but everything in the paper is wrapped in plastic.

Plastic takes 500-1000 years to degrade. In the meantime it breaks into smaller pieces of plastic and eventually its toxic components that go into the environment. It fuels our dependency on oil. It pollutes our environments and destroys marine life. 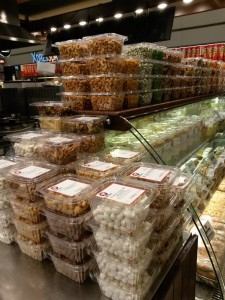 Plastic at the airport, snapped by Danny.

So the question is, how can I not contribute to this? The answer seemed pretty clear: reduce, reuse, recycle. Be the change I want to see. It’s nothing groundbreaking, simply do the things others have outlined for me.

I wanted to do something that I could accomplish myself, but also would cause people to take notice, even if it were just my friends and family.  If you are going to put in effort to do anything, you might as well strive to be as effective as possible, which in this case means reaching as many people as possible. That’s why I’m doing a blog about it. The thought to try to live plastic free was a big enough idea that I knew it would ruffle some feathers and be worthy of blogging about, and that’s a start to getting the word out. I also wanted to try this in a city surrounded by normal consumers who will be challenged by my questions and choices.

Since I’ve started the journey, I’ve found a few other outspoken opponents to plastic who live a plastic free life and live to write tips and stories from the battlefield.  This is a great blog and resource for those thinking of ways to reduce your plastic usage: myplasticfreelife.com.

How do you achieve ‘Plastic Free’ and how has it gone?

Well it’s a lot like going vegan while surrounded by carnivores. When I’m with others (friends and family) at the store, around holidays, etc, I have to compromise. I make sure to look for alternatives, but can’t argue if someone else is paying the bill and prefers a certain packaging. I’m pretty laid back about it right now.

What I really focus on is the main, definable purpose that I’ve finally reached: no one-time-use plastics, unless it’s for health reasons (something medical, I’m starving, I’m dehydrated). Again, at this point in time I’m only focusing on myself. This process of consumption awareness comes from internal realisation, not from external laws. This simple rule has allowed me to cut out probably 95% of my plastic usage. It’s also led to some interesting positive discoveries, such as the no plastic diet (post from my blog: yearwithoutplastic.wordpress.com/2013/09/03/the-no-plastic-diet/), which basically forces me to eat good food.

Besides eating, purchasing other goods is also something to be wary of. I found a loophole in my rules: I can still have nice plastic things, as long as they aren’t one time use. I can buy a new phone because I’ll use it for a few years. But to stay true to the spirit of the antiplastic lifestyle, I am moving to only purchasing used goods. I think not pulling on the demand for new plastic goods is a positive and very attainable thing, that has the side effect of saving me money and making me less materialistic. All good things for me right now.

3 thoughts on “Danny Kirschner: a year without plastic. Part I.”