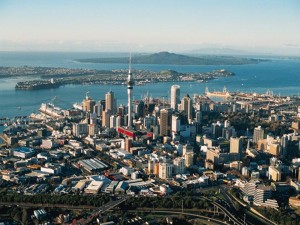 That’s Rangitoto Island in the background.

Rangitoto – at 600 years old the youngest island in the Hauraki Gulf – sits as a natural guardian to Auckland’s Waitemata Harbour.

All vessels that sail towards and away from the downtown skyscrapers towards the Pacific do so under the shadows of the 260-metre high volcano.

The jagged black rocks reaching out to the gulf at the island’s edges – which moat the world’s largest pohutukawa forest – bear testament to the island’s violently fiery birth.

Its location and makeup combine to turn Rangitoto into a bit of a trash net for Auckland. Rubbish is blown/dropped/flushed out by storm drains from the city and suburbs into Waitemata, from where currents take swathes of it towards Rangitoto, which means Bloody Sky in Maori.

It’s good news for the sea, not so good for the beauty of the island.

It’s one of the last points plastics will pass before leaving Auckland and venturing out into the Pacific. According to Adrift.org.au, after 10 years most rubbish leaving New Zealand ends up off the coast of Chile, in South America, while some accumulates off the coast of Queensland, Australia.

On Tuesday December 3, at 7.30am, I joined Sea Cleaner, who are contracted by the Watercare Harbour Clean-Up Trust to keep the city’s waterways rubbish free, from berth U2 at Westhaven Marina in downtown Auckland. The original plan had been to go up Henderson Creek in the west of the city, but due to falling tides this was changed. We – four volunteers including regular David and a Danish and a German tourist, and the boat’s captain Ben Harris – were going to Rangitoto.

Because it acted as a trash net for the harbour, the island is a regular destination for the clean-up crew and today is my third time there. The sea is proper choppy, so Ben guides the flat bowed Phil Warren II slowly over the retreating tide, past Brown’s Island to our right until we find a landing point. Against the black rocks in the distance it is possible to see quite clearly white plastic trash. Especially the garden furniture. 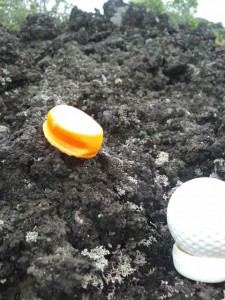 The ocean collates the rubbish, which tees it up nicely to collect.

Debris of all shapes and sizes ends up on Rangitoto, from the small clear nurdles that are the raw material for bags and other products, to tyres, to garden furniture, to kids’ toys. But from my first time on the island what really struck me was the amount of small debris there is: bottle caps; lighters; straws; cellophane wrapping from cigarette packets; tennis balls; clothes pegs; along with plenty of fragments of larger items smashed and broken down by the sharp rocks and shifting tides. To me this is evidence of items washed down storm drains from Auckland’s often brutal rain, which deposit the debris out into the harbour and then onto Rangitoto or beyond.

Head out into the harbour one morning after a storm and you can see all this debris; the cellophane from cigarette packets, along with cigarette butts, are the most prevalent.

Back to the clean up and like other areas we clear, the rubbish accumulates in specific spots, like the sea collates it for us and leaves it in easy to find batches. It’s its last-ditch attempt to get the trash out. We each take a blue sack and forage about and it’s never too long before you come across a large deposit of crap. A good way to spot it is to look for the easier to spot timber. Usually where this is found, there’s plastic. Finding plenty of rubbish feels good and bad: good because you can rid the island of a lot of plastic; bad because it is there in the first place.

After about an hour and a half scouring just a small section of the 5.5km diameter island we are back on the boat, about a dozen large sacks filled with rubbish, along with a plastic garden chair and a plastic garden table. 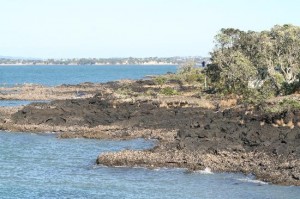 I found dozens of plastic bags, close to a hundred or so bottle tops of well-known soft drinks brands and dairy brands, a LEGO man, a decent looking rugby ball (that’s filled with water), lots of straws and stirrers, and heaps of polystyrene blocks.

On the way back we stop off at Rangitoto’s wharf, which is pretty clean, before heading to the viaduct for a sweep through.

Here it tends to be small debris too: fag butts; straws; stirrers, none of which will degrade completely for years and may too, at some point, make its way to Rangitoto Island, one of Auckland’s most valuable seacleaners.